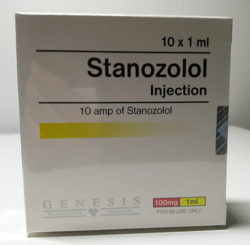 Stanozolol is a dihydrotestosterone (DHT) based anabolic steroid. Specifically, Stanozolol is a structurally altered form of the DHT hormone, two specific changes to DHT that give us Stanozolol. The first modification is the addition of an attached pyrazol group at the A-ring in place of the 3-keto group. This makes Stanozolol a heterocyclic steroid. The second change is the addition of a methyl group. This change takes places at the 17th carbon position and puts Stanozolol into the 17-alpha alkylated (C17-aa) category. The structural changes made to DHT that give us Stanozolol reduce the hormone’s androgenicity dramatically and greatly increase its anabolic activity. Stanozolol carries an Anabolic Rating of 320 and an Androgenic Rating of 20 and real life use will match up to these structural ratings very well.

One obvious difference between Winstrol Depot and other injectables is that it is not esterified, being sold as aqueous stanozolol suspension. (It should not be called water-soluble: virtually none of it is dissolved in the water.) This means that it does not have a classical half-life, where at time x the level is Ѕ the starting level, at time 2 x the level is ј, at time 3 x the level is 1/8, etc. Instead, the microcrystals slowly dissolve, and when they have all dissolved levels of the drug then fall very rapidly.