Omnitrope 10mg it contains the active ingredient somatropin. Somatropin is a biosynthetic human growth hormone which is a protein molecule occurring naturally in humans. Omnitrope is identical to the body’s own growth hormone. Some of the symptoms of an allergic reaction may include: shortness of breath, wheezing or difficulty breathing, swelling of the face, lips, tongue or other parts of the body rash, itching or hives on the skin. The dose of Omnitrope is different for each person. Your doctor will tell you what the right dose for you or your child is. 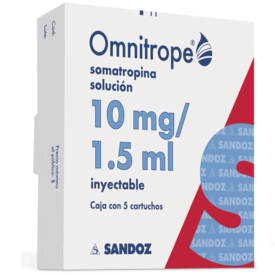 Therapy with Omnitrope should be supervised by a physician who is experienced in the diagnosis and management of pediatric patients with short stature associated with GHD, Prader-Willi Syndrome (PWS), Turner syndrome (TS), those who were born small for gestational age (SGA), Idiopathic Short Stature (ISS) and adult patients with either childhood onset or adult onset GHD.

The nice thing about Omnitrope is that in comes in a pre-mixed pen that has a dial. There is no mixing HGH with bacteriostatic water. The Omnitrope pen comes with disposable needle caps, you do not need to mix or buy diabetic needles.